I’ve been a Tarantino fan since I first saw Reservoir Dogs. From there I watched Pulp Fiction and fell in love with his style. I love the dialog chewing scenes he throws in there. It’s always between 2 characters, usually sitting down at a table. Django Unchained is no different. Like his other flicks, he builds great characters and uses actors I might not find suited for the role, but who seem to fit perfectly. Maybe because I fondly remember Jamie Fox from In Living Color and it’s hard for me to see him in a serious role, even though he’s always done a good job, and part of me wants him to do comedy again. But like always, he nails Django. From the moment we first see him in the chains, he seems destined to take revenge and get his woman back.

Let’s start at the beginning. We first meet Django (Jamie Fox) as a slave, being forced to march, in chains to his new owner. He is saved and freed by Dr. King Schultz (Christoph Waltz). Shultz is a dentist with an unusual wagon with a giant tooth on a spring on it’s roof. His real profession is a bounty hunter. Django knows the location of his next bounties so he frees him and they form a partnership. This, in true Tarantino fashion, involves the Dr blowing the head off of one of the guards and leaving the fate of the other to the slaves. He gets what’s coming to him.

Django then accompanies the Dr to a plantation where they might find the Brittle brothers. 3 men who were involved in the beating and branding of Django and his wife, Broomhilda (Kerry Washington). The plantation is owned by Spencer “Bid Daddy” Bennett (played perfectly by Don Johnson). He makes his slaves call him Big Daddy, which is kind of creepy. It’s also no surprise that he’s a klansman. He takes the Dr into the plantation while Django is shown the grounds. He soon discovers one of the brothers in the field. He finds out that the other two are about to whip a female slave just for dropping an egg. Just as she’s about to be whipped, he shoot’s both brothers. The Dr arrives just in time for Django to point the last brother riding through the field. The doctor makes quick work of him with his rifle.

Big Daddy is none too happy. Even though Schultz proves that he has a bounty for them, Bennett and his klansmen, in a very amusing scene involving homemade hoods with badly cut eyeholes, decide to take revenge on the Dr and Django. They trick the Klansmen, of course, and blow up their wagon with several of the klansmen. Django then shoots Bennett as he’s escaping on his horse, showing that Django is a natural shot. They decide to work on bounties for the winter and look for Django’s wife in the spring as they believe she’s somewhere in Mississippi.

Once spring hits, our heroes make their way to Mississippi. There they discover who bought Broomhilda: Calvin Candie (Leonardo DiCaprio). His plantation is known as Candyland, which sounds more inviting that the horrible place of torture that it really is. Candie pits slaves against each other in fights to the death. On their way to his plantation, Django and the Dr (posing as buyers of Candie’s fighters) witness a runaway fighter be torn apart by dogs. The Dr and Django hide their true intentions of buying/freeing Broomhilda by offering $12,000 for one of Candie’s best fighters, then they’re going to try to slip Broomhila’s sale in at the end. Unfortunately Candie’s head servant\slave Stephen (Samuel L. Jackson) sees through their ruse. He informs Candie, who then confronts the pair. They then offer the $12,000 for Broomhilda’s freedom. Candie accepts but only if the Dr shakes his hand. Having had enough of Candie’s hate, the Dr shoots him throught he heart before being killed himself.

Django then has a shootout with Candie’s men, killing most of them before Stephen grabs Broomhilda forcing Django to surrender. He’s told that Candie’s sister is now running things and he’s to be given to a mining company where he’ll be worked to death. On his way, Django convinces his guards (one being Tarantino himself) that he’ll share the bounty from men wanted at Candyland. They free him and give him a gun, which he uses to kill all the guards, take their dynamite and head back for his wife.

Candie’s sister Lara (Laura Cayouette), Stephen and the last henchmen are returning from his funeral, when they are met by Django at the plantation. He’s already killed the slave trackers and freed his wife, now it’s payback. He quickly dispatches the henchmen and kills Lara and caps Stephen’s knees. Django then lights the fuse for the dynamite. He and Broomhilda watches the plantation blow up and then ride off together.

First let me say that I loved this flick. I love the spaghetti western vibe and the inclusion of the original Django himself, Franco Nero in a small part. Another small cameo was Bruce Dern, who’s played in his fair share of westerns. But I also can’t talk about this flick without talking about the obvious controversy surrounding the flicks subject matter. The depiction of slavery is never a comfortable thing to deal with. It’s one of the worst parts of the US’s history and one of it’s worst mistakes. Many have criticized the overuse of the N word throughout the flick. I see this as making the slave owners even more despicable, which is hard to do because they OWN people as property. They treated them as such and very cruelly too. It makes their bloody deaths justified. In the end, I did find it a little too much, but that’s just because it’s such a hateful word. The other issue many had is with the violence, which to me is over the top and very in the vein of a spaghetti western.

Whatever your take is on this flick, hate it or love it, it’s definitely worth a watch. It shows a dark part in our history, and whether you feel it glosses it over too much or shows too much, it needs discussing. The recent rise of hate shows that those people are not all gone. I’ve heard the N word still thrown about and it’s always backed by hate. Not to get too preachy here, but it’s hard not to seeing as I’m currently in the south.

Overall, it fits the Tarantino mold and is a good add to his list of flicks. Next I need to see the Hateful Eight. If you’ve seen Django, let me know what you thought. Was it too much? Did he use the N word too freely? Does he even have the right as a white director to have that in his flick, even thought he’s portraying a time period where the ignorant used it all the time? It’s good to bring these up. I’d give it a 4 out of 5 personally. I think the actors, especially Jamie, Christoph and DiCaprio were standouts. Here’s to Fox doing another western. Maybe another Django where he’s the main bounty hunter now. Thoughts? 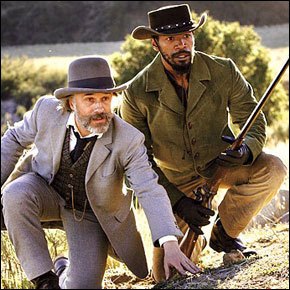